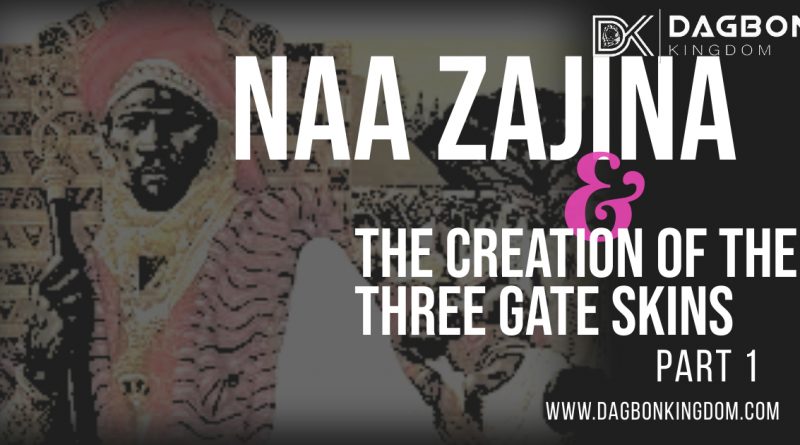 Whenever Historians discuss civilization in the Dagbon kingdom, reference is often made to the 18th king, Naa Zanjina. Whereas Dagbon griots attribute the inception and the growth of the islamic culture in Dagbon to him, other oral historians see Naa Zanjina as the father of civilization and the beginning of a new Dagbon state.

Indeed, the influx of Islamic merchants and other traders in to Dagbon in the reign of Naa Zanjina, impacted significantly in the lives and cultural practices of the Dagomba people. It is for this reason that Naa Zanjina enjoys such huge accolades.

However, Contrary to the wide opinion that Islam dawned on the Dagbon kingdom in the reign of Naa Zanjina, available evidence indicates that, indeed, Islam existed and triumphed in Dagbon long before Naa Zanjina became the king.

It was Naa Zanjina, who openly practiced the Islamic religion and made conscious efforts to see the growth of the islamic culture in Dagbon. He planted islam in the very heart of royalty.

In the reign of Naa Zanjina’s father, Naa Titugri, the capital of Dagbon was moved from its previous location at western Dagbon (Yeni-dabari)to its current place of Sankara yili.

When Naa Titugri arrived to settle at Yendi, he met a group of Hausa settlers, who were led by a man named “Mohammed Zanjina”. These Hausa settlers practiced the islamic religion and engaged in cotton farming and weaving.

Kamshe- Naa Zanjina became a spiritual advisor to Naa Titugri and greatly influenced the future decisions of the Yaa-Naa and his counsel.

Eventhough Naa Titugri is not recorded to have practised the islamic religion, he however named two of his sons after the Kamshe-Naa or perhaps the founder of the islamic religion ; prophet Mohammed (S.A.W). One of these sons was Naa Zanjina, who was named ” Mohammed “.
” Nyɔɣu din yɛlim ni deei bɔbiri”

THE BIRTH OF NAA ZANJINA :

Naa Zanjina’s birth and his early life was not as glorious as his name in later years. His mother, resided in a town known as Saakung.

She was an ugly woman and no man in Saakung looked at her twice, lest to think of marrying her. Unable to find a suitor, she was taken to her Aunt’s home in another village known as Sabari. But there, no suitor showed up either and so she remained in her Aunt’s house.

It is for this reason that when the lunsi of Dagbon sing the praise name of Naa Zanjina, they usually refer to him as “Saakung mini Sabalinim pagbiegu bia” For his mother, Napag’ nanga, was the ugly woman, who could not find a suitor in Saakung and Sabari.

Customarily, when a new Yaa-Naa ascends the Gbewaa Skin, certain chiefs are obliged to gift him a wife. Through the machinations of her aunt, “Napaga Nanga” was betrothed to Naa Titugri.

The king does not reject a gift. For it is said that, anything good or bad, gets a place to settle at the Gbewa palace. And so Naa Titugri took her in under the wife title of “Napag Taayuli/ Napag Taayiri “.

And when Napag Taayuli learnt to prepare the favourite meal of the Lion king and where he slept, the gods blessed her with a male child. One of the wisest king of the Dagbon kingdom; Naa Zanjina.
” Gunguma tigsi yiliya kun bang kpema”

It is said that Naa Zanjina’s mother, Napaga Taayuli didnt enjoy her stay in the Gbewaa palace. Her rivals often avoided her company and prevented her from touching their cooking pots.

No one ate the food she prepared or the morning porridge she served. In the midst of this treatment, Napag Taayuli decided to make some money out of what Naa Titugri gave her. She sold some of the food stuff and made some little money. This, she gave to her son to start a business later in life.

When Naa Zanjina was quite young, he often avoided the things that normal children did. He wasn’t always seen at the playground like his age mates. Instead, he was always seen running errands for the elderly people in society. He took care of horses of the palace elders and cracked their toes at night, while they slumber.
Through this, he was taught a great deal of wisdom.

Read More; The advent of the lunsi in Dagbon State

It is important to mention that, the sons of the king are not always raised in the Gbewaa palace, especially the elder son. It is a taboo for the Yaa-Naa to set eyes on his first son in daylight, when he’s a grown man.

Though not the first son of Naa Titugri, Naa Zanjina was raised by her uncles. It was in the care of her uncles that Naa Zanjina became a successful trader. His trades often took him far from home into distant lands, in to Nigeria and Mali. Perhaps Naa Zanjina stayed more in Kano-Nigeria than any other place in his trading business.

When he returned home to Dagbon, the people often referred to him as “Mahamaru kano” and it is this name which has been further corrupted to
” Mankaanu”

Today, this title has become a royal praise name for anyone who bears the name “Mohammed / Mahamaru”

A SEARCH FOR A NEW KING FOR DAGBON

When Naa Titugri passed on, having ruled for 19year, his younger brother, Naa Zagli took over the Gbewaa skin as Ya Naa. His reign lasted from about 1589 – 1609.

Eventhough the Oracle had chosen Naa Gungobili as the next successor of Naa Zokuli, he was a destitute, while Galwei Naa Kundoni was a wealthy man. Galwei-Naa Kundoni used his wealth to influence Yogu-Kpamba to try to turn the successorship in his favour.

However, for the fear of the repercussions it might bring upon the kingdom, Naa Gungobili ;the destitute prince was finally enskinned as Yaa-Naa.

His reign lasted from 1627 – 1648 – ruling for 21years. After the death of Naa Gungobili, the task of Yani Kpamba, in the selection of the next king became more difficult.

Seven children of Naa Titugri showed up to contest for the Gbewaa Skin. All of them were elder brothers of Naa Zanjina;

The only contender, who wasn’t the son of Naa Titugri was Naa Andani Sigli. Andani Sigli was yet a Prince, who hadn’t yet occupied any chieftaincy skin. He was the Son of Naa Zagli ( 1589 – 1609). Andani Sigli was therefore a cousin to the seven brothers, including Naa Zanjina.

This brought the number of contenders to eight; excluding Naa Zanjina. Naa Zanjina showed no interest in contesting for the lion Skin.

The lunsi and oral historians often refer to Naa Zanjina as ” Yɛm binbiɛrilana” ( The wise king) due to the nature of his ascension to the Yani skin of Dagbon.

As his brothers were busy, showing off their might and wealth, Naa Zanjina showed virtually no interest in becoming a Yaa-Naa.

He visited each of his brothers, promising them all his unflinching support and loyalty in the contest. He gave each of them a hundred cowries to show his commitment to their course.

But unknown to his brother, Naa Zanjina had already visited the Gushe-Naa and all those who mattered in the enskinment of a Yaa-Naa.

The chief of Gushegu at that time was Gushe-Naa kpeenbegu. Naa Zanjina presented to him, a golden kettle to keep his colanuts, a red hat, a smock and a cloth each for his wives.

With this gesture, Gushe-Naa kpeenbegu was impressed. “Indeed, our elders say that a child who washes his hands clean, dine with elders. You, Zanjina! You have shown that if Yɔɣutolandi is in your hands, you’ll be a father to both the rich and the poor.

This last task proved rather strange to Naa Zanjina. For it is not known in Dagbon history that the selection of a Yaa-Naa should have anything to do with the Nayiri.

Nonetheless, he obliged and made his way to mamprugu. The king of maprugu at that time was Naa Atabiya. Naa Zanjina on arrival, presented to him a smock, a white hat, a golden kettle for his colanuts and some amount of money.

He also gave a clothe each to his wives. Naa Zanjina then sneaked back to Dagbon, awaiting the day Naa Gungobili’s final funeral rites will be performed.

Finally, the funeral rites of Naa Gungobili was finalized and all the contending princes gathered and waited patiently at their huts for a message from the Yogu Kpamba, as who ascends the Gbewaa Skin of Dagbon. But that was not to be !

A message came from Gushe-Naa kpeembegu ” we do not wish to break apart your family. A decision has therefore been made to take the matter out of Dagbon, to your father’s brother, the Nayiri. This is to ensure that whoever is chosen as Yaa-Naa will be a decision taken by your own family- The Gbewaa family.

Indeed, with such a bizarre decision on the part of the Yogu Kpamba, there are those who hold the opinion that, Naa Zanjina was chosen by the Oracle but for the fear that he was the youngest, any attempt to pronounce him as Yaa-Naa would result into a grave debacle and a possible family war.

It was Naa Zanjina, who openly practiced the Islamic religion and made conscious efforts to see the growth of the islamic culture in Dagbon. He planted islam in the very heart of royalty.

Who is the current king of Dagbon?

The current King of Dagbon Kingdom is Naa Gariba II, He has being the King since January 18th 2019. 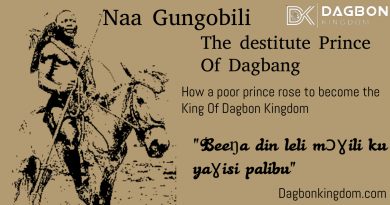 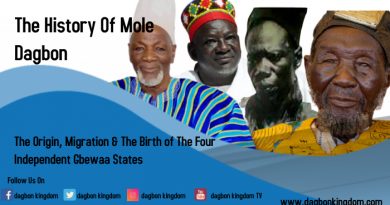 The History Of Mole Dagbon State 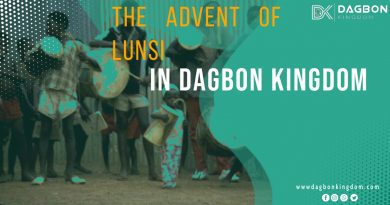 The advent of the lunsi in Dagbon State